I recently returned from a trip to South Africa and had the good fortune to visit Upington in the Kalahari desert. I had heard many good things about Upington airport and given its high ASQ score was keen to see what makes it special. 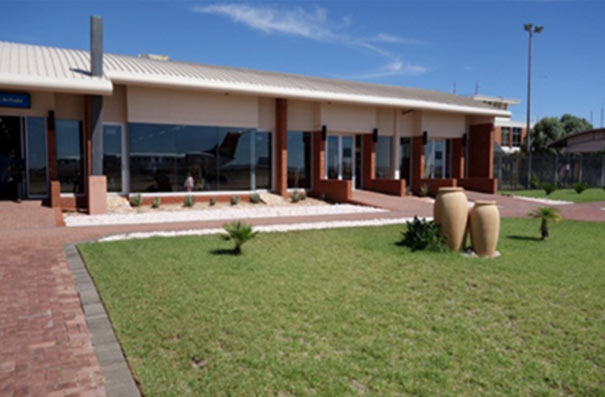 Upington is known for its fruit, wines and the heat – being in the Kalahari temperatures regularly rise to temperatures I normally only experience opening the oven.

Upington airport itself is small – very small. It has a couple of flights per day and around 55,000 passengers per year. Although it does have a 4,900m runway which is one of the few long enough for the NASA space shuttle.

The small size of the airport means that it is far less well known than the bigger ACSA airports, particularly the big three, Johannesburg OR Tambo, Cape Town and Durban King Shaka.

However, Upington for me is a perfect example of how small airports can create a unique, wonderful passenger experience. As ever, it is just a case of attention to detail and doing the basics – the simple things – consistently well and in Upington’s case, extremely well.

Attention to detail and a personal touch
The experience starts as you step off the aircraft, the terminal is in front of you with some carefully placed urns and neat landscaping giving you the impression you’ve arrived at classy hotel rather than an airport. 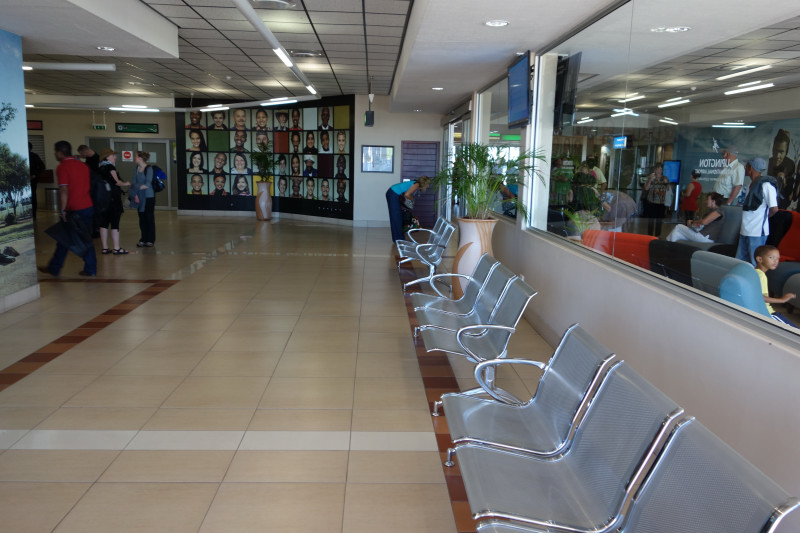 As you step into the terminal (you won’t hang around outside in these temperatures), the first thing that strikes you is how neat and tidy the airport is. Banks of seats are strictly in line and there is no litter whatsoever. Pleasingly, there is also no advertising allowing the airport to offer an uncluttered experience.

At the far end of the arrivals hall is another personal touch – a large poster of all the people who were involved in decorating the airport. This gives the airport a very human, personal face. 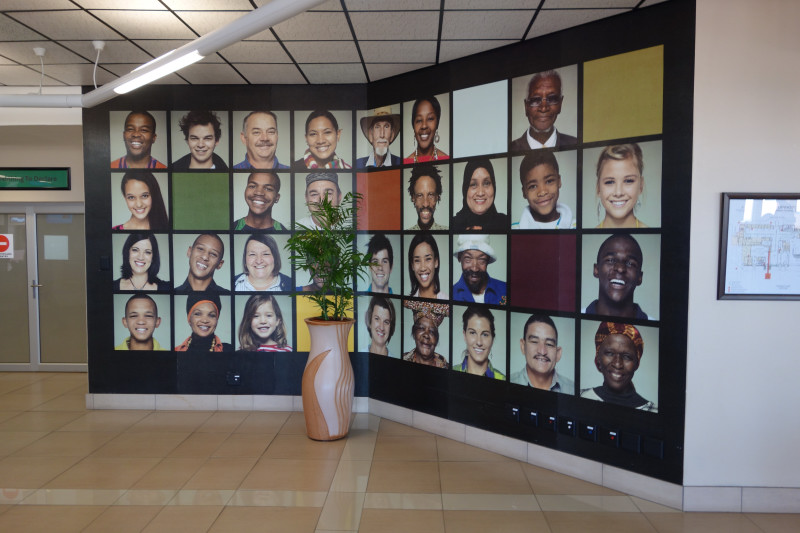 Photos of locals who were involved in decorating the airport

Simple vases are sparingly placed around the airport making for a restrained, but often classy ambience. It was nice to see vases and plants carefully selected to fit the surrounding area, both in terms of colour and size.

A sense of place 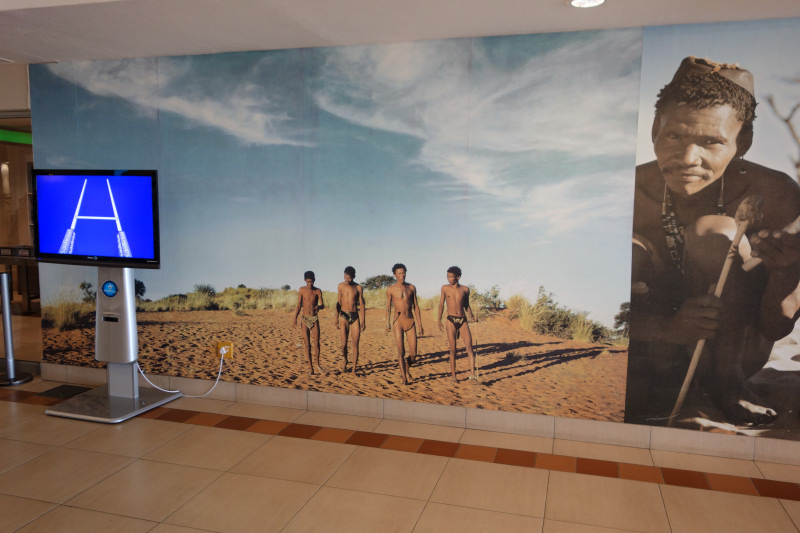 There are also large posters on the walls depicting the Khoisan people – the famous bushmen of the Kalahari. You instantly know exactly which airport you’ve arrived at and the posters give a great impression of light and space in what is actually quite a small area.

Of course this being South Africa, we also have a TV showing the rugby.

A little imagination and a lot of attention to detail 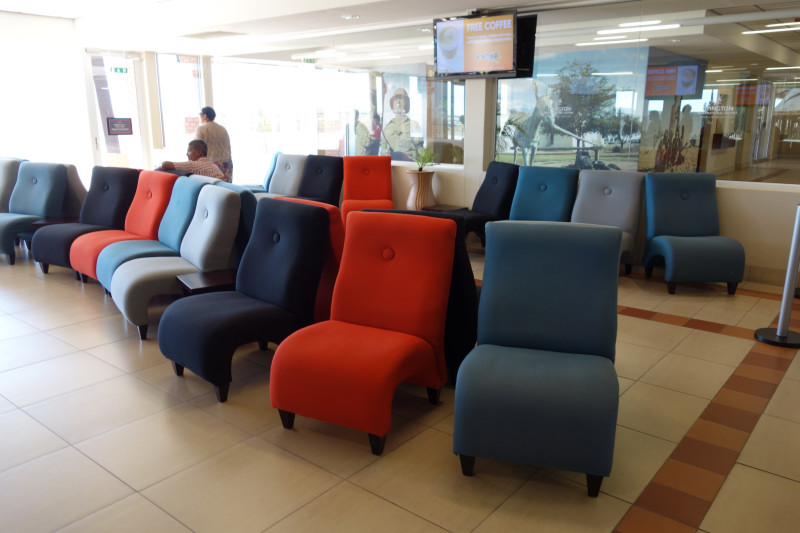 Comfy seating in the gate areas

One of the things I appreciated about Upington is the amount of thought that has clearly gone into the smallest details. When purchasing the seating, it would have been so easy to simply take standard metal or wooden lines of seats. However, here we have comfy chairs, arranged into curving arcs to create a welcoming, cosy ambience. Sure passengers tend to move them around and mess up the arrangement, but as the staff explained to me, it only takes a couple of minutes to rearrange them after each flight.

Another example of attention to detail is at the baggage belt. We see this in too few airports around the world: baggage trolleys lined up ready for passenger use. It’s a very simple, thoughtful and welcome touch. 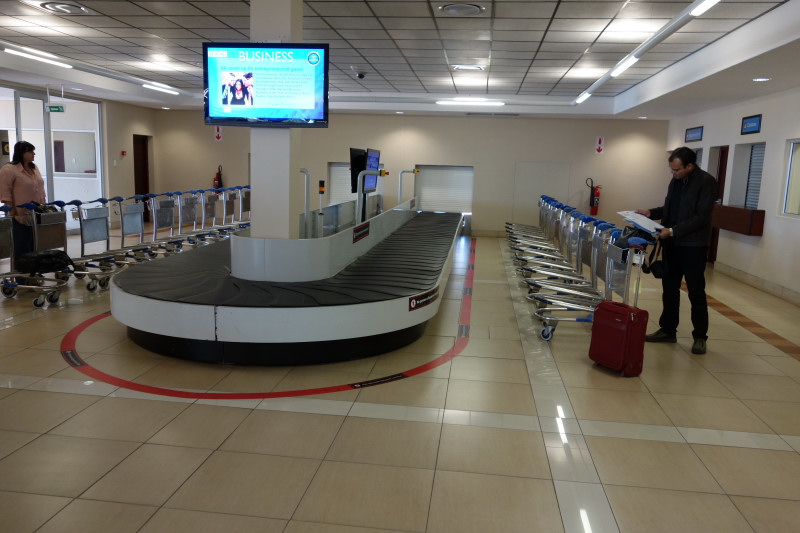 Baggage carts lined up near the belts

I was also struck with the precision with which the trolleys had been lined up. Clearly staff here are extremely proud of their airport and work hard to make it perfect. (I didn’t find a single piece of litter around the airport).

Time and again we see how an airport’s organisational culture can create a virtuous circle of excellence as staff, proud of their airport, go to great lengths to keep it looking immaculate.

Using company culture to create a consistent look and feel
ACSA staff credit previous airport manager, Esmaralda Barnes for creating this culture and the unique ambience at Upington. Esmaralda has now moved on to Bloemfontein Bram Fischer airport, but acting airport manager Conwill Willemse appears to be fully bought into her ideas.

This impression was confirmed in the main landside area where orderly, comfortable seating designed to allow people to sit and chat together makes a very welcome change from the standardised rows of benches and metal / plastic seating many airports select almost by default, with no thought for how the seating will be used, or appreciated by the passenger. 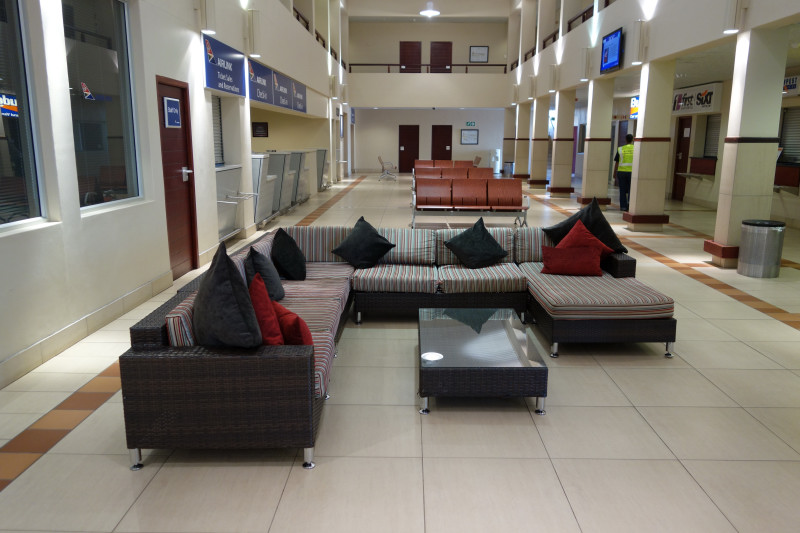 Creating a great passenger experience is based upon understanding how people would like to spend their time. A little time spent on thinking how to create a “hotel” like experience rather than defaulting to “holding tank” can make all the difference.

It’s also nice to be in an airport which has restrained itself from putting too much advertising and clutter on the walls which gives the passenger a much calmer, more serene experience – very much a case of “less is more”.

Outside, the airport has created a small café / bar designed to be in keeping with the local traditions and look and feel. While the café is simple, and open to the furnace of outside, beautiful landscaping and a waterfall makes it a very pleasant place to sit and rehydrate.

I also counted 4 tortoises in the garden and a mongoose; which shot like lightning through the fence and toward the runway. Apparently snakes like to bask on the tarmac.

At the entrance to the airport are 3 display cases. One showcases all the awards won by Upington, the other two show off local arts and crafts – a good way to demonstrate local traditions and demonstrating again the uniqueness of Kalahari culture. 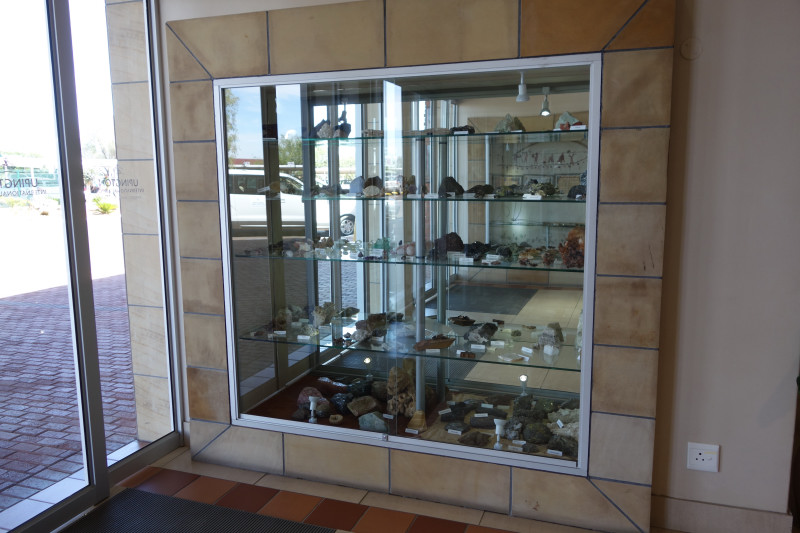 Finally, in an airport this size, there’s little chance of getting lost and the signage is simple and functions well. But I did notice this sign at security. While the message is simple and to the point, I really appreciated the humility and obvious warmth of this personal touch, which is so rare amid the usual threats and intimidation at security checkpoints. It doesn’t cost anything, but leaves the passenger with an impression of caring professionalism at Upington. 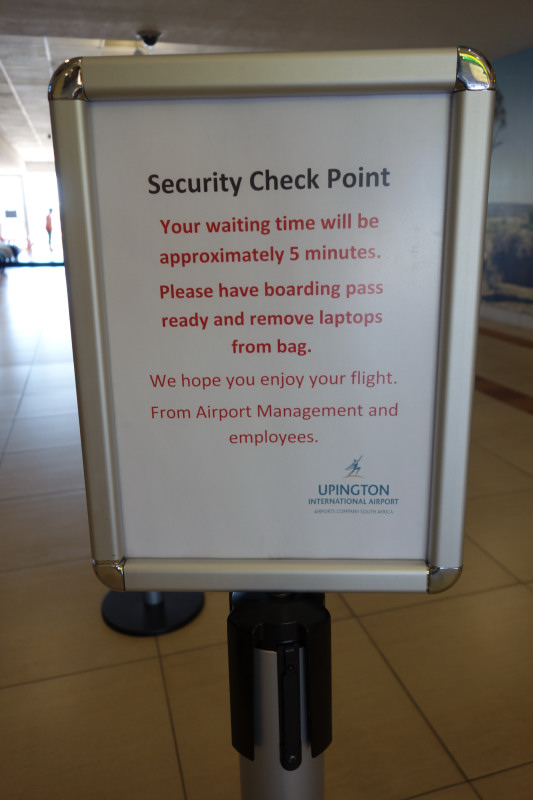 Security can be friendly

One thought on “Small airports providing a fantastic passenger experience” 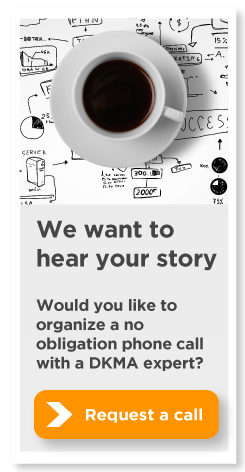